Gracia Clark has studied the Kumasi Central Market in Ghana, West Africa since 1978. Her thesis research in Social Anthropology at the University of Cambridge highlighted the regional dominance of this urban daily market, and the relations of credit, leadership and domestic work that kept its 20,000 traders in their stalls.

She consulted for the International Labor Office and United Nations Development Fund for Women for several years before teaching at University of Wisconsin, Parkside and the University of Michigan, Ann Arbor. Subsequent fieldwork addressed development issues of food security and trade liberalization and recorded life stories from older traders. A forthcoming Indiana University Press volume of life stories titled Raising Capital, Raising Children complements her 1994 book Onions are My Husband.

Her IDAH project Virtual Kumasi Central Market seeks to recreate the fieldwork experience by structuring the original materials interactively so that the visitors’ questions shape what they learn.

Margaret Dolinsky is an Associate Professor and Research Scientist at the H.R. Hope School of Fine Arts at Indiana University Bloomington. She creates interactive art for high-speed networks and collaborative art experiences for the CAVE Automated Virtual Environment. Her recent work involves digital projections for opera and experimental cinema. Her research focuses on how art aesthetics provokes shifts in perception and enhances sensory awareness.

Dolinsky is a researcher with the Centre for Advanced Inquiry in the Integrative Arts at the University of Plymouth, U.K. She co-chairs the IS&T/SPIE Engineering Reality of Virtual Reality conference. Exhibitions include SIGGRAPH, Ars Electronica, ICC, and the Walker Art Center USA. Her work is published in Leonardo, Discover, Computer Graphics World, US News and World Report and ACM's Computer Graphics. Lectures include Tsinghua University (China), Ciber@rts Bilboa (Spain), Sensorial Net (Brazil), BEAP (Australia), and ISEA (France). She received an MFA in Electronic Visualization from University of Illinois at Chicago.

John Gibson is Assistant Professor of Composition at the Indiana University Jacobs School of Music. His instrumental and electronic music has received performances by the London Sinfonietta, the Seattle Symphony, Speculum Musicae, and at numerous conferences and festivals, including Tanglewood, Marlboro, Bourges Synthèse, Brazilian Symposium on Computer Music, Third Practice, SEAMUS, and International Computer Music Conferences held in Beijing, Havana, Belfast, and Copenhagen.

Significant awards include a Guggenheim Fellowship, a Charles Ives Scholarship from the American Academy and Institute of Arts and Letters, and the Paul Jacobs Memorial Fund Commission from the Tanglewood Music Center. Recordings of his music appear on the Centaur and Everglade labels. He writes sound processing and synthesis software and has taught composition and computer music at the University of Virginia, Duke University, and the University of Louisville. He holds a Ph.D. in music from Princeton University.

His recent work seeks to present traditional acoustic instruments in a new light by transforming their sound in unexpected ways using his own custom software. The focus of his IDAH Fellowship work is the composition of music for laptop orchestra, in which multiple laptop performers collaborate by exchanging sound and information via a wireless network.

Joss Marsh is Associate Professor of English and Victorian Studies at Indiana University, Bloomington. She is the author of *Word Crimes: Blasphemy, Culture, and Literature in 19th-Century England* (1998), a book unusual amongst academic works in having been described as both "monumental" and "a page turner," and numerous essays on Dickens, Chaplin, the 19th-century novel and film, Victorian visual culture, celebrity, film stardom, and the magic lantern.

She has a long-standing commitment to public lecturing and public outreach and has collaborated in the production of four documentaries with the BBC. She also occasionally submits to the discipline of theatrical performance—most recently as Widow Corney in Oliver! (Cardinal Stage), Lady Bracknell in The Importance of being Earnest, (Detour Productions), and Scrooge (in drag, for the BPP)—and values the different kind of knowledge it can offer.

Since 2006, with her research partner, David Francis OBE, she has been deeply involved in reconstructive magic lantern performance and lecturing, using original slides, authentic texts, and an 1891 tri-unnial lantern, at: the Cinemateca Portuguesa (Lisbon), the Dickens Universe (UC Santa Cruz), the Academy of Motion Pictures Arts and Sciences, the Pacific Film Archive, U Michigan, the Museum of Modern Art, the National Gallery of Art (D.C.), and (most recently, with the assistance of a New Frontiers grant), the Harvard Film Archive and Yale University (NAVSA).

The areas of the lantern repertoire and of Victorian culture these shows have helped Joss and David research and explore, to date, have included: the relationship between visual story-telling with the lantern and cinematic narrative; temperance propaganda; religious and missionary uses of the lantern; the Victorian "Service of Song" (a mix of story, images, and music: a form of nineteenth-century "musical"); the representation of movement, especially railway travel; the illuminated fairy tale; and the extraordinary multi-media career of the late Victorian celebrity writer George R. Sims. They presented on Sims in London, in the premises which once housed the Royal Polytechnic, the center of the late-Victorian lantern world, in April 2009; in January 2009, they presented "The Magic Carpet," on lantern-assisted virtual travel, at the Vienna Art Museum/Film Archive.

Kirsten Sword is an assistant professor in the Department of History; she is an historian of early America in the Atlantic age of revolutions, with particular interests in gender, race and the law. Her central intellectual concern is with the transformation of early modern household relations of dependence from assumed and accepted ways of ordering society into social and political problems. 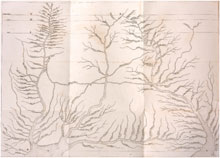 Her IDAH project, Mapping Antislavery, is a geospatial database that tracks Quaker networks, itinerant people of color, antislavery propaganda, and courtroom challenges to slavery during the late eighteenth and early nineteenth-centuries. The project maps long-hidden connections among antislavery activists and events, offering fresh perspectives on the rise of antislavery that hold broad significance for multi-disciplinary debates about emergence of humanitarian social movements. She will be developing a database structure that can be integrated with open-source geographic systems to generate maps and other tools for visualizing historical data. The technical aim is to create a prototype for larger databases that will facilitate collaborative and cumulative social historical research.