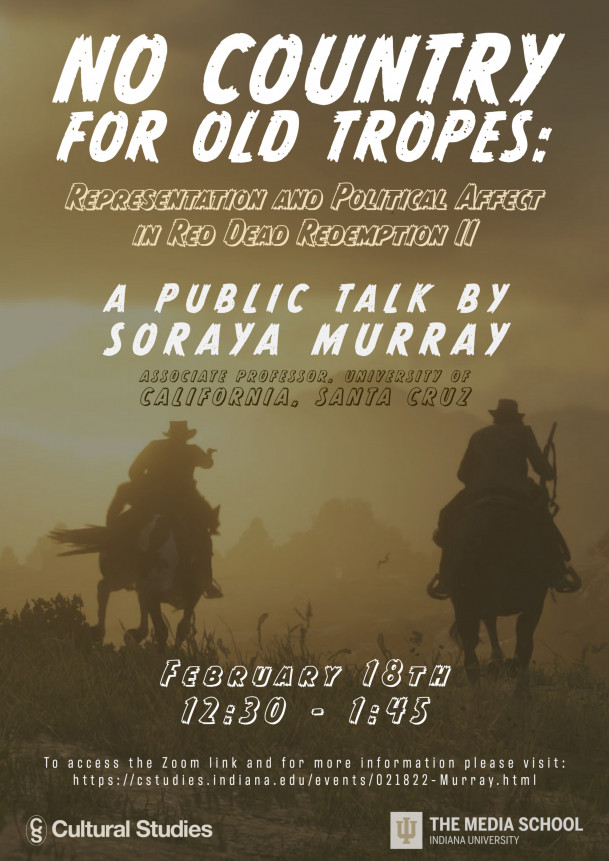 Rockstar’s iconic western-themed action adventure series, Red Dead (2004- ), is typically discussed in terms of its visual realism, historical authenticity, or how it engages with quintessential American cultural mythologies. It is often debated whether the games ultimately critique or reinforce of those values expressed within their universes. In this presentation, Murray articulates how the game’s aesthetics, appropriation of the Western genre, as well as its space and time-based experience, all contribute to a concentrated political affect that engages with an American political present—and perhaps even its potential futures. Enhancing a growing game studies discourse on inclusivity, this research further develops Murray’s visual studies of playable representation, grounded in an understanding of form as deeply enmeshed in identity politics, not separate from it.

Soraya Murray is an interdisciplinary scholar of contemporary visual culture, with particular interest in art, film, digital media and video games. Murray holds a Ph.D. in art history and visual studies from Cornell University, and an MFA in Studio Art from the University of California, Irvine. She is an Associate Professor in the Film + Digital Media Department at the University of California, Santa Cruz. Her writings have been widely anthologized nationally and internationally, and published in journals in the areas of contemporary art, film and digital culture, including venues such as Art Journal, Nka: Journal of Contemporary African Art, CTheory, Public Art Review, Third Text, Open Library of Humanities, PAJ: A Journal of Performance and Art, Feminist Media Histories, The Journal of Cinema and Media Studies, the European Journal of American Studies and Film Quarterly. Murray’s book, On Video Games: The Visual Politics of Race, Gender and Space (I.B. Tauris, 2018, paperback 2021), considers video games from a visual culture perspective, and how they both mirror and are constitutive of larger societal fears, dreams, hopes and even complex struggles for recognition. Murray is currently co-editing an anthology with TreaAndrea Russworm on antiracist futures in games and play. She is also completing a book on contemporary cinema, difference, and the technological imaginary. www.sorayamurray.com